“OUTSIDE OF THE KITCHEN” 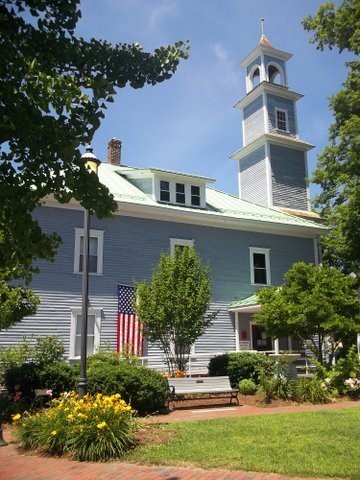 It is curious how one museum object can serve as a seed that would later blossom into an exhibit. That is exactly what happened with A Woman’s Place. Upon admiring a tinsel painting by local artist Alice Knight, museum co-curator Christina Chadwick was impressed with Alice’s resourcefulness in using household items to express her creativity and her courage to defy the social mores of her time. Christina wondered how many other women had also stepped “out of the kitchen” to create works of art using available items at their homesteads. She brainstormed with museum co-curator Gary Sparks. Before they knew it, they had developed a theme: “A Woman’s Place – Artistry and Resourcefulness outside of the Kitchen” and a list of other highly accomplished local women who deserved recognition.

Some of these women lived all their lives in the greater Hillsborough area; others were transplants. Some achieved local fame, some national, some international. However, each transcended the social boundaries placed upon women in the nineteenth and early twentieth centuries.“  We hope you enjoy this exhibit of their work and learning more about these remarkable local women.

Painter Alice Knight (1861-1963) specialized in the innovative and challenging technique of tinsel painting on glass, and “ is considered a top artist in this field. Some of her tinsel paintings were displayed in the 2012/2013 exhibition entitled “Foiled: Tinsel Painting in America” at the American Folk Art Museum in New York City. “
“
Photographer Lotte Jacobi (1896-1990) was named “the greatest woman photographer of the twentieth century.” She was celebrated on the world stage for her ability to capture the human essence of her famous subjects such as Einstein, Eleanor Roosevelt, and Robert Frost.

Environmentalist/author Beatrice Trum Hunter (1918-2017) dedicated her entire life to warning the public about the toxins lurking in food, water, air, and soil. She gave worldwide lectures and wrote many informative books, captivating Americans in 1961 with the first natural foods cookbook in the United States.

Three members of the Marcy family of Hillsborough and Henniker achieved prominence.

Pianist/composer Amy Marcy Beach (1867-1944) was a musical genius from childhood.. Starting at the age seven, she performed in public venues such as the Boston Music Hall, and as a soloist with the Boston Symphony.“  At the age of eighteen, she married Dr. Henry A.A. Beach who restricted her public performances but allowed her to continue to compose. After he died, she resumed performing in public, embarking on a successful concert tour of Europe where she was hailed as a highly talented composer and performer. One of the greatest honors bestowed upon her is having her name etched into a granite wall at the Hatch Shell in Boston.

Amy’s aunt, singer/painter Mrs. “Franc” Marcy Clement (1842-1925) began a long and successful singing career as a teenager in Concord, New Hampshire and in churches in Boston and Dorchester, Massachusetts. “ A longtime San Francisco resident, she was in high demand for both concert and religious choral groups due to her “superb contralto voice”. In 1872, she sang at Boston’s World Peace Jubilee.

The Hillsborough area was also home to a number of women talented in other fields.“  Needlework artist Edna S. Perk (1890-1969) was known for her needlecraft skills and expertise in creating countless samplers. Her sampler depicting symbols of New Hampshire was featured in a 1954 exhibition in Amsterdam, Holland. Her most special sampler, which highlights some accomplishments of Hillsboro native President Franklin Pierce, evokes pride in our residents.

Poet/painter Florence Kimball Favor (1879-1977) was a multi-talented woman. Her greatest recognition was for her collection of poems which was published in 1914 in her book entitled Songs of the Field.“  A self-taught artist, she specialized in painting flowers and landscapes. Folks sought her out as a fortune teller! She taught“  art for ten years. Florence’s writing, including her poetry, frequently appeared in the Messenger. “ Her regular column, “Hillsboro Memories”, featured her tales of Hillsborough’s past.

Artist Mae Hogg (1922-2001) was hired by nationally known Hillsborough photographer William Manahan, Jr. to meticulously hand color his black and white prints using such mediums as ink, dyes, watercolors, and pencils. Mae working with others, painted a mural on the walls in the vestibule of the Henniker Town Hall in preparation for our nation’s bicentennial celebrations in 1976.

Folk artist Miss Lizzie Dowlin (1885-1959) was recognized as a skilled woodworker. She made birch brushes, chairs, picture frames, and small figurines. Locally she was referred to as an “interesting person” because of her unusual hobby of collecting meteorites and Native American artifacts on her property along Pierce Lake. She was made an honorary member of the Ladies Aid of the Lower Village in 1952 for her acts of kindness throughout her life.

Why these women? Why did they flourish despite the antiquated clamoring of a male-dominated society designed to suppress female competition? These women weren’t seeking fame and fortune. These women weren’t activists. Simply put, these were resourceful women who shared a passion. A passion to creatively express their innate talents: to paint, to write poems, to compose music, to make wooden items, to author informative books, to photograph celebrities, to sing, to play the piano. Their talents could not be ignored and, inadvertently, served as catalysts that propelled these women forward regardless of the societal limitations.“  Each one of these women, by virtue of her example, set the course for future generations of women.

“In the Footsteps of Alice Knight”

A display of lovely 21st Century Tinsel/Reverse Glass paintings done by students at the Hillsboro-Deering Elementary School very nicely supplements our “A Woman’s Place ” exhibit. Teacher Liz Brett has cleverly devised a way for her third grade students to create these colorful works using modern everyday materials in a way artist Alice Knight would understand. The results of her efforts are terrific! What a wonderful way to learn about artists like Alice Knight while simultaneously expanding her students’ artistic skills. Their work is displayed in various locations throughout the museum. Our thanks to Ms. Brett and her students.

“A Voyage of Discovery”

In this exhibit we describe and interpret how citizens from Hillsborough and Deering played a role of some sort – big and small – in the United States’ becoming a world“  power stretching from the east and west coasts to the shores of China and Japan.“  We begin the story at Hillsborough’s founding and with its earliest settlers in the mid 18thcentury.

We then move along to the tale of Horace Holden.“  Born in Hillsborough in 1810, he wished to earn some money to help his widowed mother.“  He figured that whaling would be a good source of income, so in July, 1831 he made his way to New Bedford, Massachusetts and signed on as a crewman on the whaling ship “Mentor”.“  Shortly after reaching the Pacific, the “Mentor” encountered a fierce storm and was wrecked upon a reef in Polynesia.“  Holden and other crewmembers were enslaved by natives of the Palau chain of islands.“  Rescued in 1835, he returned to Boston where he wrote a famous and well received account of the shipwreck and his experiences entitled Holden’s Narrative.“  The book, which predates Moby Dick, remains an excellent example of early American shipwreck literature.“  Holden later travelled to the Sandwich Islands (now Hawaii, our 50th state) and eventually became one of the early American settlers in Oregon .

Hillsborough’s Franklin Pierce, 14th President of the United States from 1853-1857, is unfortunately not widely known for his accomplishments regarding U.S. expansion and trade.“  Born in Hillsborough in 1804, and a former state legislator, member of Congress, and U.S. Senator, this Mexican War veteran planned to encourage the nation’s growth as a“  world power.“  To a certain extent he succeeded. His administration was responsible for several treaties which promoted American trade with foreign nations including Great Britain, Canada, and Japan.“  The treaty that opened trade with Japan would be the most famous.“  President Pierce promoted and fully supported Commodore Perry’s famous naval expedition to Japan.“  This changed the course of American, Japanese, and world history.

Next we find ourselves in the 20th century.“  Rosalie Hunt grew up in Hillsborough in the years prior to World War 2,“  graduating from the grammar school in 1931 and high school in 1935. Leslie Kincaid grew up just over the town line in Deering.“  He also graduated from the grammar school in 1931.“  He eventually went on to join the navy and see the world.“  Initially he did so as a bluejacket on board the battleship “New Mexico”. He became interested in aviation.“  He became a member of the crew of the famous carrier “Enterprise” and served in the Pacific where he served as the U.S.A. was drawn into World War 2.“  He and Rosalie were married in Hillsborough in 1943.“  His navy memorabilia and her WW2 era scrapbooks help tell the story of life in Hillsborough before, during, and after the conflict“  and how hundreds of Hillsborough’s citizens, in their own way, and like people across the country,“  helped shape the outcome of the war.

Also included in the exhibit is a replica of sorts of Hillsborough’s wartime airplane spotter shack which gave a number of citizens a chance to help with the war effort.“ “  We also remember the story“  of the famous and lamented “Four Chaplains”, one of whom, the Reverend Clark V. Poling, had strong ties to Deering