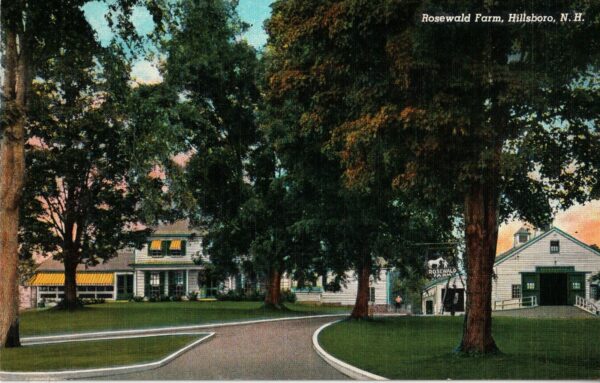 Kathryn Sprague Forbush grew up next door to the rose-walled farm.“  Her complete essay on what she remembers follows.

Rosewald Farm was originally the vision of a man named William Niedner, from Malden, Massachusetts. Mr. Niedner was a prosperous and public-spirited businessman and philanthropist. One of his personal dreams was the creation of a model dairy, and to that end, he purchased two adjoining farm parcels on Center Road in Hillsborough. The northern parcel, the former Russell Farm, became a working dairy, with a processing plant attached to the existing farmhouse. Mr. Niedner ordered construction of four new Dutch-style gambrel barns: one large dairy barn for the milking cows and three smaller barns for bulls, young stock and sick or injured animals. He invested in the best available Guernsey stock to produce the rich milk for which this breed is known, and became active in the Guernsey Association.

The southern parcel became his residence. Carefully-maintained drystone walls lined Center Road from the Murdough place to the bend by the small Clark burying ground, walls lined with climbing pink roses. I remember the roses as pink, although there may have been a few variations. Mr.Niedner named the combined parcels “Rosewald Farm” for those roses.

Sadly, Mr. Niedner died unexpectedly in 1947. Rosewald Farm then was purchased by Leon M.Fitch, another businessman/philanthropist, formerly of Keene, who took up residence in the house at the southern parcel. Mr. Fitch continued to house dairy cattle at the neighboring farm, but instead of Guernseys he had a small herd of registered Holstein-Friesians, supervised by William Rasmussen, who was an experienced cow man although he had been otherwise employed before coming to Rosewald Farm. Mrs. Fitch had two horses, Sage and Ginger, but they lived at the lower farm.

My father Raymond A. Sprague purchased the upper half of Rosewald Farm in the early 1950’s. With the help of Mr. Rasmussen, he began to develop the Holstein herd, although the milk-processing plant had gone out of operation at the time of Mr. Niedner’s death. Dad renamed our parcel “Midridge Farm,” but I recall that the dairy barn and farm sign hung from a big elm by the driveway displayed the name “Rosewald Farm” for quite a while after we moved in.

Mr. and Mrs. Fitch continued to live in the lower parcel, with its white buildings and dark blue trim, for many years. They were generous and kind neighbors, hosting an annual Christmas party for their grandchildren and other children on Center Road for several years after we moved to the neighboring farm. I especially recall that Mrs. Fitch made candied caramel apples, highly prized by trick-or-treaters at Halloween. Those apples made the spooky walk past the little cemetary between the two farms worth every gloriously scary minute!

Beyond the little cemetery the drystone walls continued, but from Mr. Fitch’s property north Center Road was bordered to the edge of Fox Forest by young maple trees. Mr. Fitch saw to it that his roses were pruned, fed and shaped for all the time of his ownership. One wag commented that he had seen employees there trimming the plantings with nail scissors! That was an exaggeration, but whatever tools were used, the result was unfailingly beautiful. The first flush of bloom occurred each June, and the color and fragrance along that stretch of Center Road drew comment and admiration and a fair amount of traffic as well. I don’t think the name “Midridge Farm,” ever really caught on for Hillsborough folk, and our place was called “the Sprague farm” but more often just “Rosewald.” I could understand that – those roses were unforgettable. 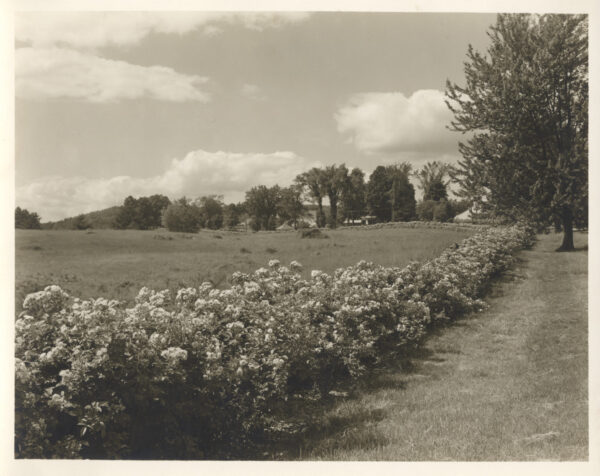 And for those who may be new in town, it is now known as Farmsteads of New England, Inc. and has a long history in Hillsborough. In 1777 Benjamin Dutton and his wife, Patty, came to Hillsborough from Billerica, MA and settled on the road leading from Bridge Village to the Centre. The farm passed through two generations and was then used as the setting for a story, “The Gayworthys” written by Benjamin Dutton’s granddaughter Adeline Whitney. In 1793 the farm was sold to Moses Nelson, previously of Leominster, Massachusetts, when he settled in Hillsborough. Then known as Nelson Farm, it later passed to Moses Jr. who remained on the old homestead. Eventually the farm passed into the hands of William Neider who had a herd of 130 top-quality Guernsey cows on the farm. In addition to the herd, William Neider planted rose bushes up and down the stone walls bordering Center Road. Not only did they add an unusual aesthetic quality to the beauty of the farm, but the smell must have been wonderful!

Tragedy and A Snow Train…