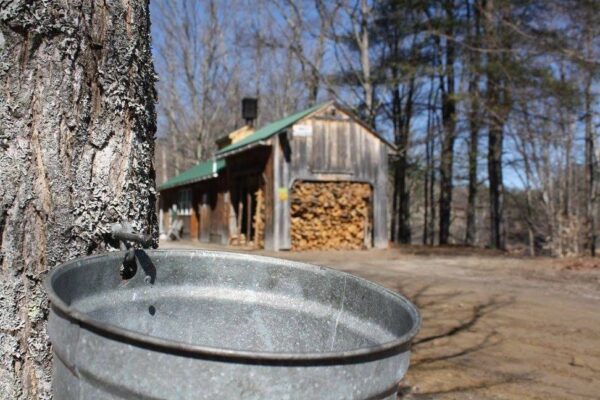 For 33 years the Hunt family in Hillsborough Upper Village has carried wood, fired up the boiler, and turned clear-as-water maple sap into sweet, golden syrup. Charles Hunt, Sr., (with his son Charlie) owns the sugarhouse at 28 Gleason Falls Road and is the chief operator. He and his wife Teresa started with 10 buckets and a little shed; last year they bottled 600 gallons of syrup. “I’d love to make 1,000 this year,” he told us in late January, soon after Hunt’s product was rated “Best of the Year” by the N.H. Maple Producers Association. Making maple syrup is an amazing process, but it’s not easy and a lot of it is beyond human control. The most important single factor in sugaring is the weather. This year, Hunt is looking forward to a cold, sunny February – and, of course, March.  He started tapping trees in late January, waiting for the weather to be just right.

“ January 16, 1896 – “Harold and Frank Harvey tapped some sugar trees the last of December and sugared off January 1st, and from personal knowledge, the flavor of the syrup can be highly praised. We never tasted any that was nicer.” — Hillsborough Messenger

“ “The better the weather, the sooner we start,” Hunt says. Sap runs need long, cold springs to set off the contest between frost and the sun. An ideal day for collecting sap? “I’d like to see 27-28 degrees at night, then 34-35 degrees at 9 a.m. with bright sun and a blue sky.”

Like many sugar producers, Hunt thinks the first run of sap is the best. “If you miss it, you’ll never get it back – it’s gone,” he says.

The precise origins of sugaring are lost in time, but it’s certain Native Americans made syrup and solid sugar, and the earliest European settlers were quick to follow the practice. During the American Revolution, maple sugar was touted as a patriotic and moral alternative to sugar cane produced by slaves in the British-controlled West Indies. Ever since, most farmers tapped nearby trees and boiled enough syrup for family use and a little extra income. Old-time sugar makers trudged through the snow, hung covered buckets over hand-carved or metal taps, and used oxen pulling a sled to collect sap. Traditionally, tapping started after Town Meeting.

“ March 6, 1916 – “George Clough from the Lower Village is helping Elmer and Kenneth Crane during sugaring. Those who have tapped, report a good run of sap.” — Messenger

Sugaring has always been a family business and is today. Charles Hunt, Sr. works with his son, whose taps are on the old Crane farm off Route 31; his wife Teresa does the business bookkeeping. Teresa (Crane) Hunt grew up in the maple sugaring business. Her father, Robert Crane, was a farmer and sugar maker as well as the road agent for the town of Washington.“  Her great-uncle Richard Crane (auctioneer, raconteur, and 101% rebel during the nuclear dump resistance in the mid-1980s), boiled syrup in the Upper Village from the 1930s till his death. And patriarch Perley Crane, Teresa’s grandfather, started his sap-to-sugar operation in the teens of the 20th century and made syrup every year of his life.

February 9, 1976,“  “Sugar makers are clearing roads and yards around the sugar houses. Donald Crane is the new president of the Maple Sugar Association. How proud his father would be! Sugar making comes down a long way in the Crane family and it looks as if it would continue, for Bobby thinks it is the best time of the whole farm year!”“

March 13, 1976, “Dimp Crane and his men are busy making maple syrup. They report a fine run of sap as do others who are thoroughly enjoying the results of a good sugar season.” — Messenger,

The maples – sugar and some red – the Hunts tap grow on almost 100 acres in the Upper Village and nearby Washington, some acres family-owned and some rented. The sugarbush is carefully managed according to a forestry plan. Every tree gets visited multiple times, inspected, trimmed, and set up with a connection to the miles – (about 5 or 6 miles) – of food-grade plastic pipe. All the pipes have to be carefully inspected and upgraded when needed.

Sugaring is not a seasonal occupation. The Hunts work at it year-round. They burn wood, the traditional fuel for the fire. “It takes all year to get everything ready,” Charles Hunt told me. The goal is maximum production with maximum efficiency. Cutting and stacking the wood is a months-long process. Hunt burns about 11 cords of wood in a sugaring season and cuts wood a year ahead.“  (His neatly stacked wood sheds are a sight to admire.) It’s about 99% pulp pine – wood otherwise destined for chips or pellets. To boil sap efficiently, the wood has to be cut the right size, and it has to be dry. Hunt sees to this himself. “Every stick has to be just right – no fooling around.”

March 26, 1914, “Spring was snapped on us last Saturday, but the fellow who was handling the thermometer forgot to turn on the heat.” –“  “The snow is quite deep in the woods with a crust as strong as ice.”–“

April 9, 1914, “The last week has been reported as an excellent sap week and Wednesday of last week was reported by some as a record-breaker.” past week.” — Hillsborough Messenger,

At Hunt’s Sugar House, boiling syrup takes at least three well-trained workers, as well as grandson Brayden Hunt, an entrepreneur who’s already making and selling maple cotton candy. One man, usually brother-in-law Guy Eaton, tends the fire and keeps it going. Another key player, often son Charlie,“  monitors and tests the syrup as it thickens in stainless steel evaporating pans on the steel and masonry arch over the fire, and tests it for density using a hydrometer. At 219 degrees, it’s syrup, but the Hunts, using a hydrometer, start to test it at 211 degrees and draw it off at precisely the right density to be filtered and graded by color.

Then comes bottling, dealing with sales, and keeping up the stock of syrup, maple candy, maple cream, and dry maple sugar. Here’s where the visitors come in – hordes of them – to watch, taste, and buy. In one good night, the Hunts may process 40 gallons of finished syrup. 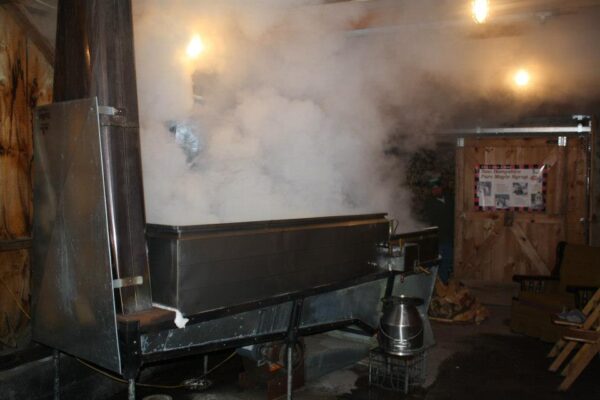 That’s a staggering amount of maple syrup, and it’s made possible by many technological advances in sap collection and processing. Hunt calls those he enlists“  “enhancement opportunities.” An important one is reverse osmosis, which concentrates sap by pulling it through sensitive membranes, greatly reducing water content before boiling, even up to 25% of volume. Hunt uses a modern evaporator and a timer that buzzes every 7 minutes to signal reloading to keep a constant heat. He uses forced draft burners, steam hoods, a defoamer, a hydrometer, and a finishing pan. Automatic draw-off monitors the temperature in the syrup pan. And electric modulating draws off liquid by density.

Sugar making is clearly a New Hampshire tradition, good business, carbon thrifty, and great fun to watch. Maple syrup is a unique product, made in small batches on a small portion of the globe. Its market is practically guaranteed.

There may even be a trickle-down profit.

April 9, 1901–“  “Maple syrup labels are now in order. We print them; get our prices.”– Hillsborough Messenger,

Tragedy and A Snow Train…